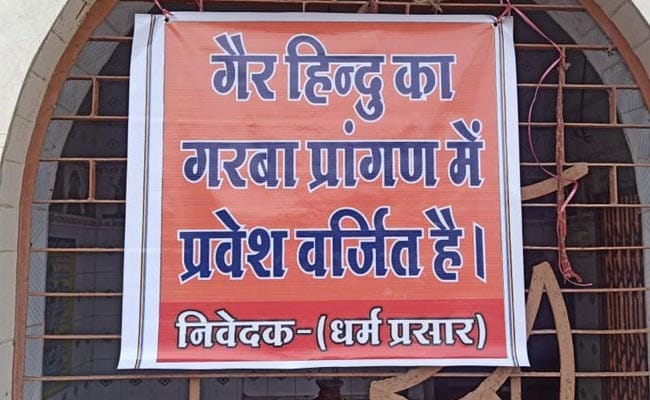 The VHP stated it has positioned the posters stating the “entry of non-Hindus is prohibited” throughout 56 pandals.

The Vishwa Hindu Parishad (VHP) has put up posters prohibiting the entry of “non-Hindus” within the pandals the place Garba dance is carried out hailing Goddess Durga in the course of the ongoing Navratri pageant in Madhya Pradesh’s Ratlam district to keep away from the repeat of “controversial incidents” of the final yr, a functionary of the organisation stated on Monday.

The VHP stated it has positioned the posters stating the “entry of non-Hindus is prohibited” throughout 56 pandals.

“The entry of non-Hindu youths had led to controversies at many places last year. By putting up such posters, non-Hindu people are being told not to enter the garba and Durga pandals so that such incidents can be avoided,” he stated.

Mr Sharma stated VHP employees are putting such posters with the consent of the pageant organising committees.

Ratlam Sub Divisional Magistrate (SDM) Abhishek Gehlot stated the administration has not obtained any criticism on this regard.

“The administration will look into the issue (the posters) in case of any complaint,” he stated.